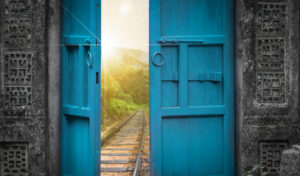 Early hours last Thursday morning I was having a shower and in my minds eye I was seeing where the planets are positioning themselves in the sky for the month of December.  I am sure you all know the shower is a great place to get some intuitive downloads and for me it was very symbolic for this last month of the year and onwards. I saw the image of a threshold with the doors partly opened and was puzzled at what this means?? As curious as I am I began to look deeper into what this means and I can now share with you so you all can make Dec. and the big shifts of change in 2020 much easier to handle, if you so choose.
The Month of Dec. starts out with the Sun still in the constellation of Scorpio till Dec.16th where it will shift into and join all the stellium of planets in Sagittarius getting ready for the Solar eclipse on Christmas day and the energy still in affect on Boxing day! Most eclipses show there effects up to 3 months after. Mars is in Libra with Mercury. Mercury has began to pick up speed now after the last retrograde of 2019 moving into Scorpio on Dec.4th where communications will have an emotional undertone.
Venus moves out of the crowded constellation of Sagittarius on Dec.15th. giving her more freedom and resulting in people spending more. Mercury zooms through Scorpio and enters Sagittarius Christmas day along with transiting Mars entering Scorpio the same day!  Transiting Mars will be 12th from all the planets in Sag. Mars energy in Scorpio this time will give a boost bringing up deep 8th house matters so things such as corruption with government taxes and revealing more about how big this web of sex trafficking really is.
Why? Well transiting Jupiter which is a Karaka(significator) for children will be hidden and involved with this Dec 25th Solar eclipse in the Nakshatra of Mula at 9 degrees almost 10 actually and will contain information coming out due to it being in the area of this Nashatra ruled by Mercury(pads 3). This eclipse is with Ketu ( the South Node of the Moon) and relates to the past. Mula is known to be a very destructive area of our Galaxy due to one of our massive black holes located there. This is the centre of the Milky Way/centre of our Galaxy and is symbolized by tied roots. Anything tied gives the energy of restriction or in this case twisted with blackmail! Mula has a lot to do with investigating things that are hidden underground like roots but needs to be uprooted and exposed which may seem destructive however in this situation revealing and untying the past deeds on children will bring more light and healing to our children! Remember Sagittarius is the natural 9th house, indicator of strong religious practises and those who lead them as well as higher law/justice and higher truth so lets see how after this Solar eclipse if the REAL truth finally gets untied!
As for Canada this eclipse will be occurring in our 4th house which we will continue to sort out issues with our homeland security include data software company issues, more drug and child trafficking/organized crime will be exposed and further developments on our Pharmaceutical system. As the West is feeling cut off (Ketu) from the East there maybe possible uprooting and changes to old legislated bills/regulations to begin to move forward for provincial equality. As of right now I do feel and see the energy of a referendum for Alberta.
This month of Dec. especially after the Solar eclipse is like the beginning or THRESHOLD to world change. It is an exciting time for Jupiter and Ketu by months end will be within a few degrees of each other, assisting everyone to step over the entrance and make some great changes towards higher conscious living. Maybe its just having a look at what we eat more consciously and incorpotating new healthier plant based choices. Maybe its uprooting who we keep company with and find higher energy beings to be around or it could be having a deep look and seeing if what we believe or not believe about anything is really the truth. Ultimately it’s undoing our programming …stripping yourself down to nothingness and begin a fresh. The doors are open it is up to each and everyone to step through and be the best we can be as spiritual beings living in these bodies but in order to step through we must always begin with our OWN THRESHOLD. That is truth!
As always Love and Light on your Journey Laurel